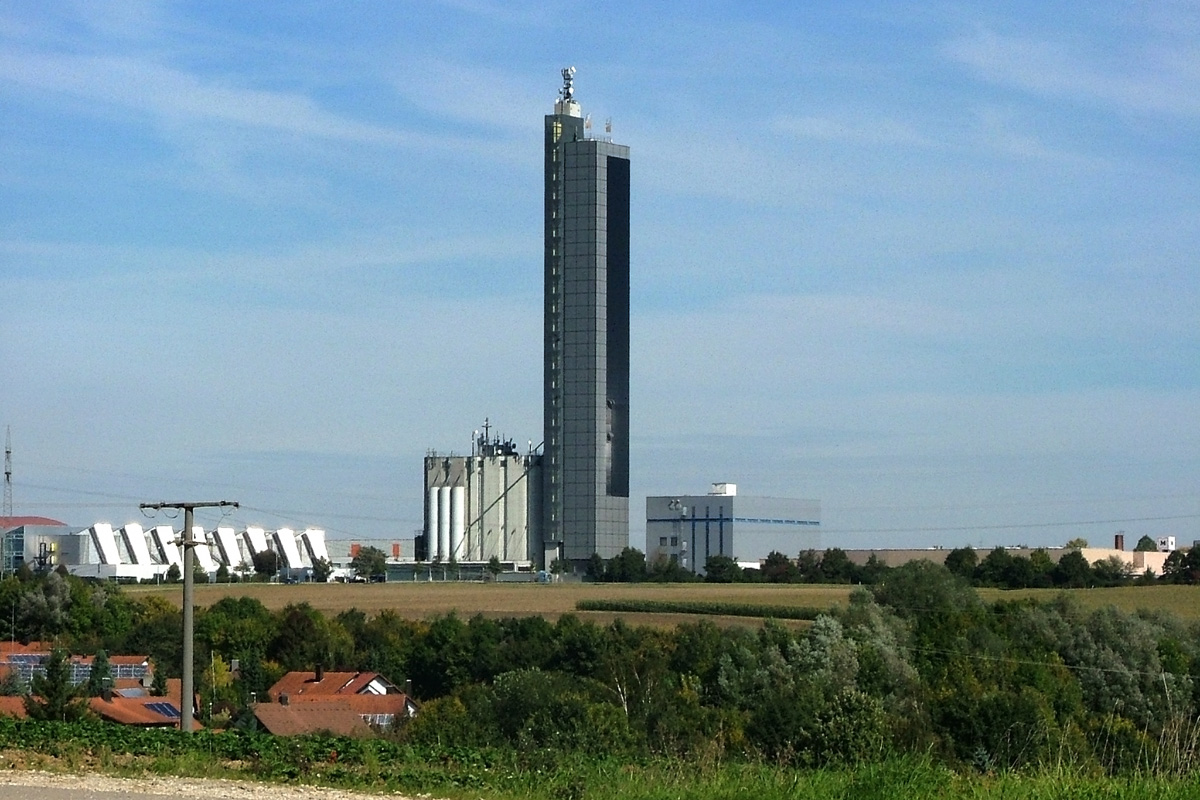 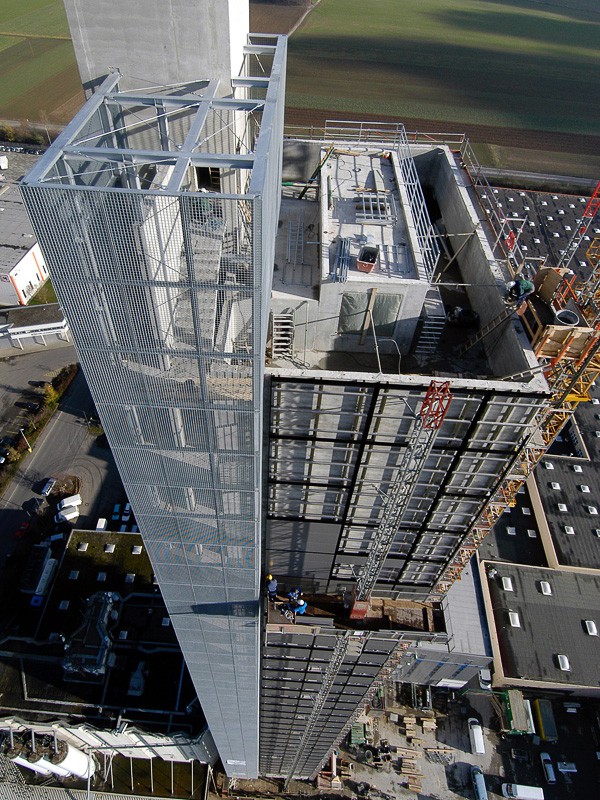 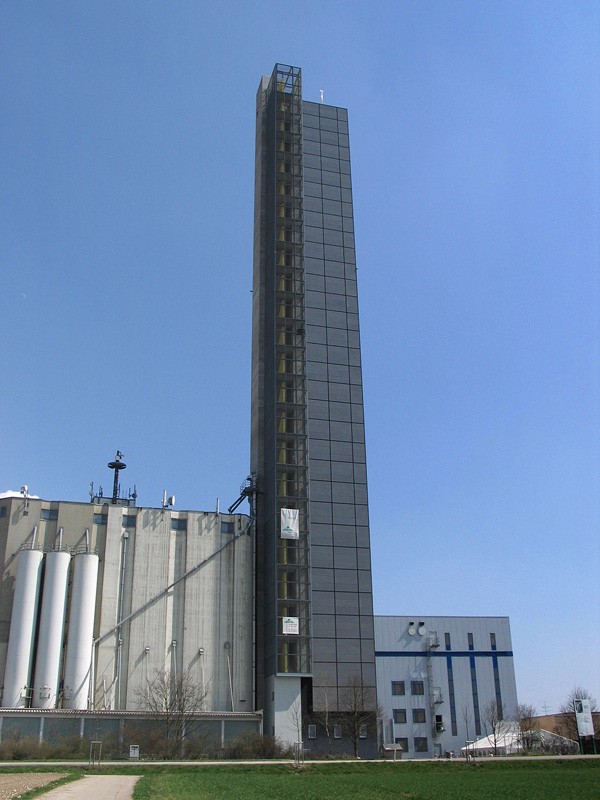 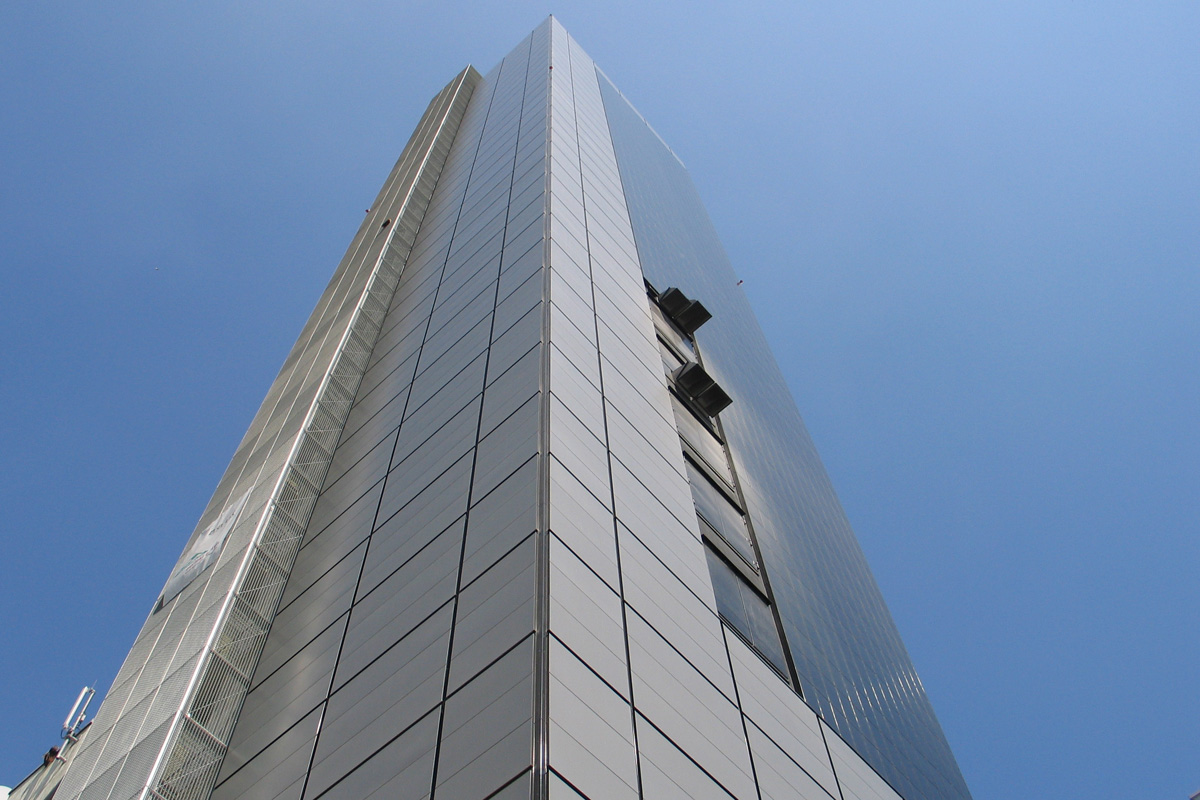 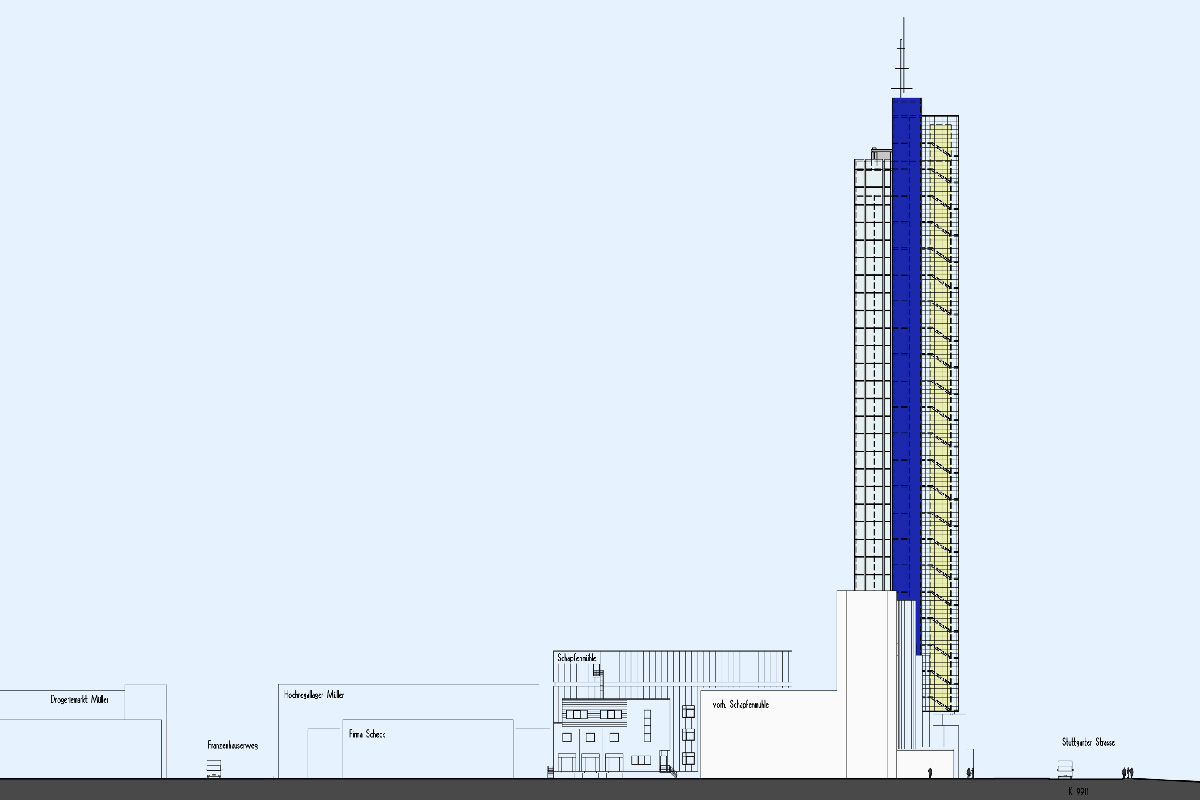 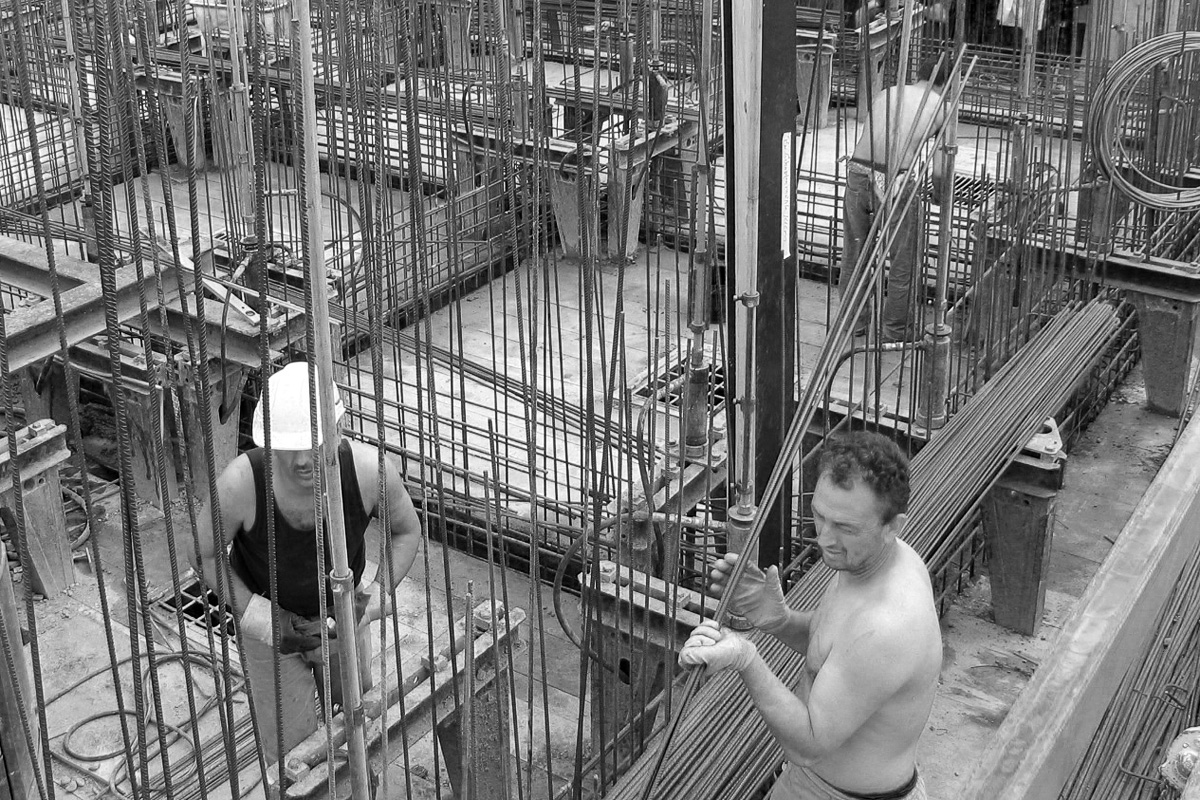 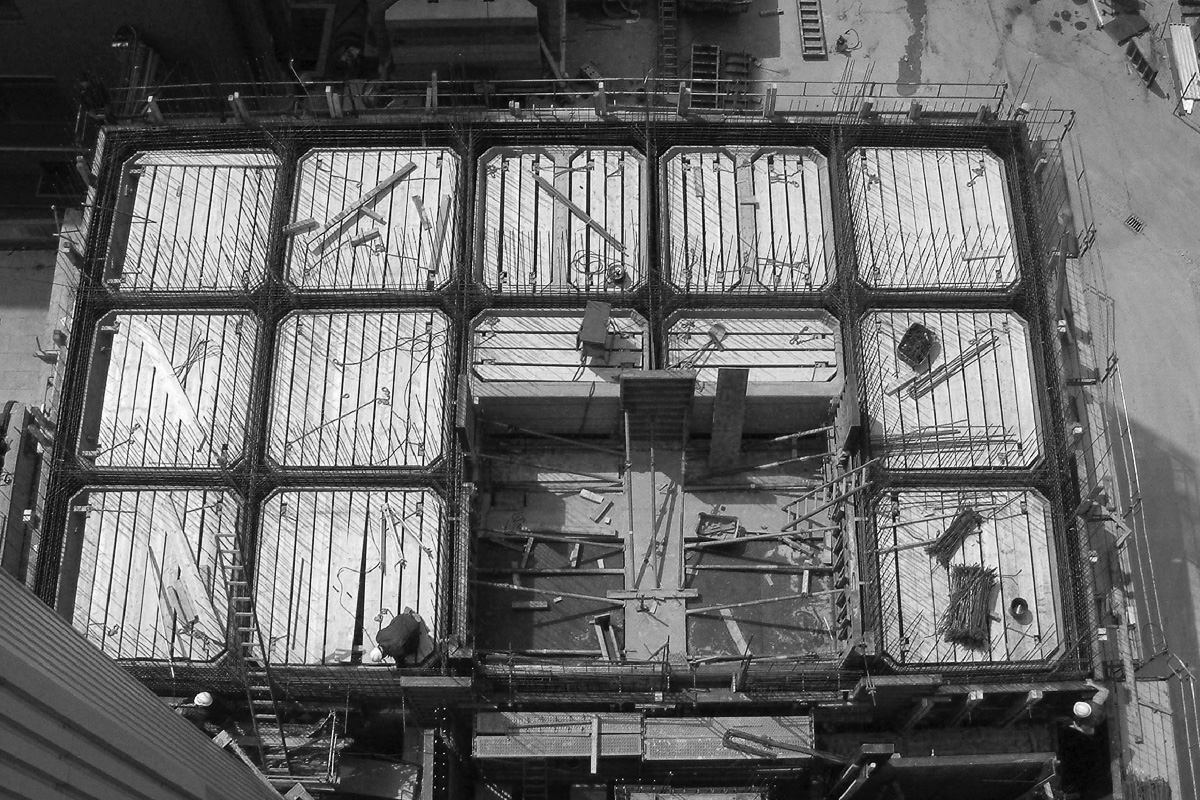 At the northern entrance to Ulm, located at one of the most elevated places of the city, the new Schapfenmühle granary is of particular town planning significance. This puts considerably higher requirements on the design of the 115-metre high tower than this is the case with customary industrial buildings. With close cooperation of client, architect and the municipality, a façade cladding made of curtain-type elements with a grid of 3 x 3 m was selected, which was additionally equipped with photovoltaic modules on the south and east side.
However, the building also presented the planers with a technically exciting challenge: since the multi-compartment silo had to be implemented in immediate proximity to the existing mill building on a confined construction site – its base area is only 16.65 x 10.13 m –, it inevitably had to grow upwards. Although it is quite usual that the height of silo cells is markedly greater than its sectional diameter, this principle was carried to extremes for the Schapfenmühle, so that, 9 of the 27 grain compartments with a base area of approximately 3 x 3 m have a height of 90 m. This resulted in completely new conditions for the technical equipment of the silo building, which required a further development of plant technology so far available.
On the other hand, this building method resulted in very high vertical loads in a very small space; since there was hardly any space for overlapping foundations, the granary was despite the rock-like subfloor built on 27 large foundation piles with a diameter of 1.20 m and a length of about 19 m, which are positioned directly underneath the load-bearing walls and columns. At the same time, the silo compartments and service rooms had to be arranged next and on top of each other so that vertical loads could be evenly transferred and optimal working routines became possible. To be able to construct as quickly and efficiently as possible, the engineers chose the slip-form construction method with just one interruption at a height of 45.50 m.
Due to the continuous sliding speed, good reinforcement distribution and a consistently high concrete quality, this concreting method required the optimal coordination of wall thicknesses; that is why the engineers chose 30 cm for perimeter walls and 25 cm for interior walls. This resulted in a balanced cross-section, which with using an average of 0.6 t reinforcing steel and 5.7 m³ concrete per hour facilitated a sliding speed of up to 4 m per day and simultaneously an exemplary concrete quality.