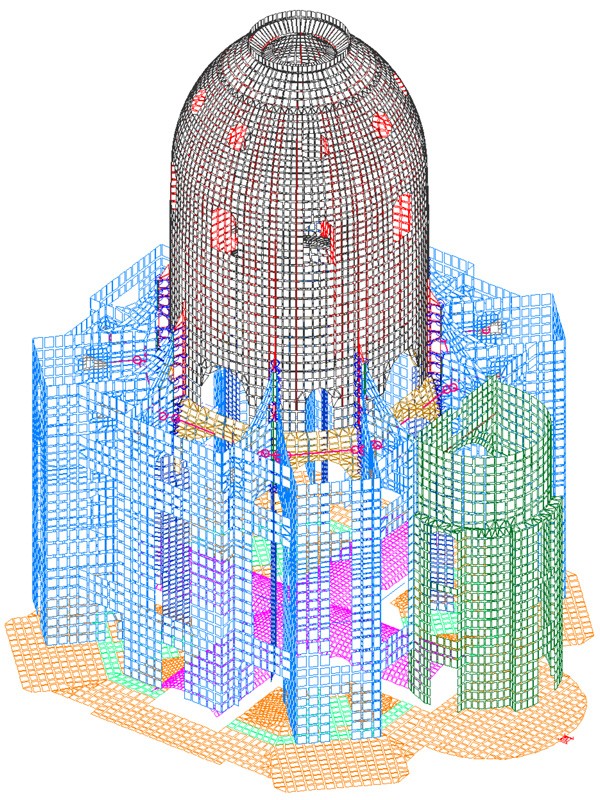 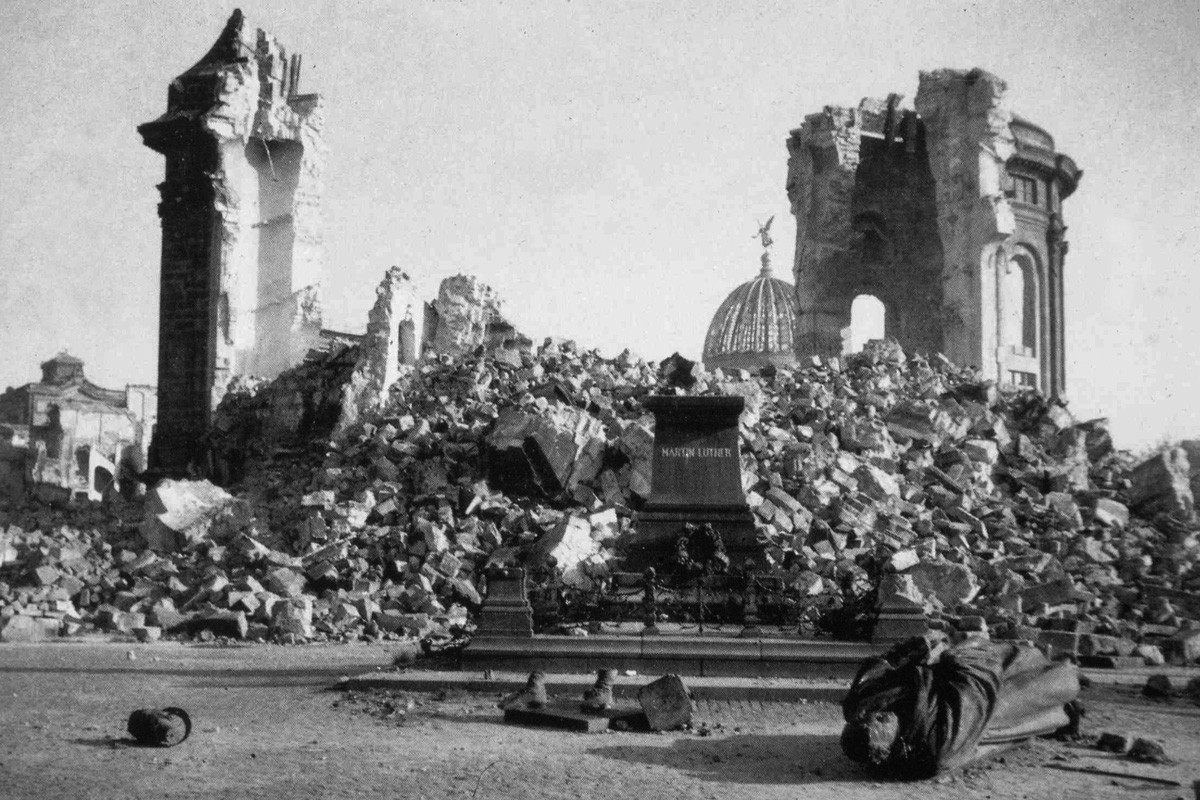 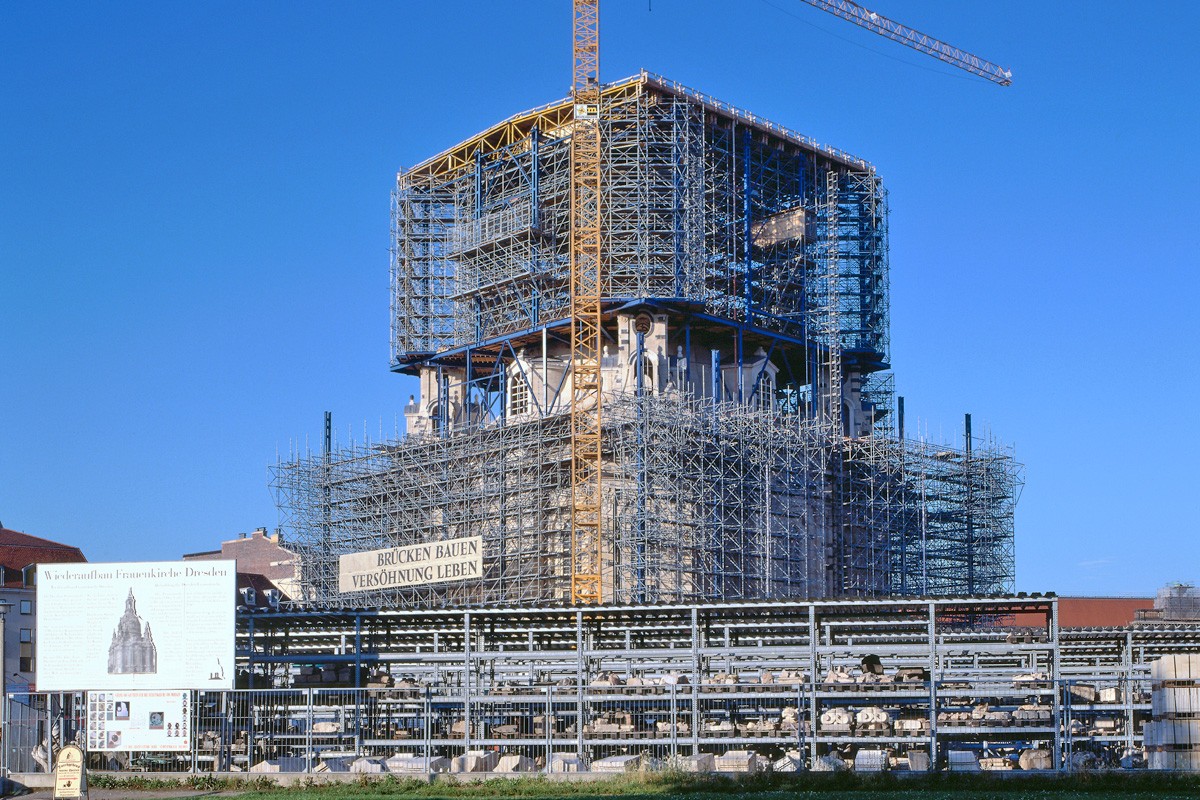 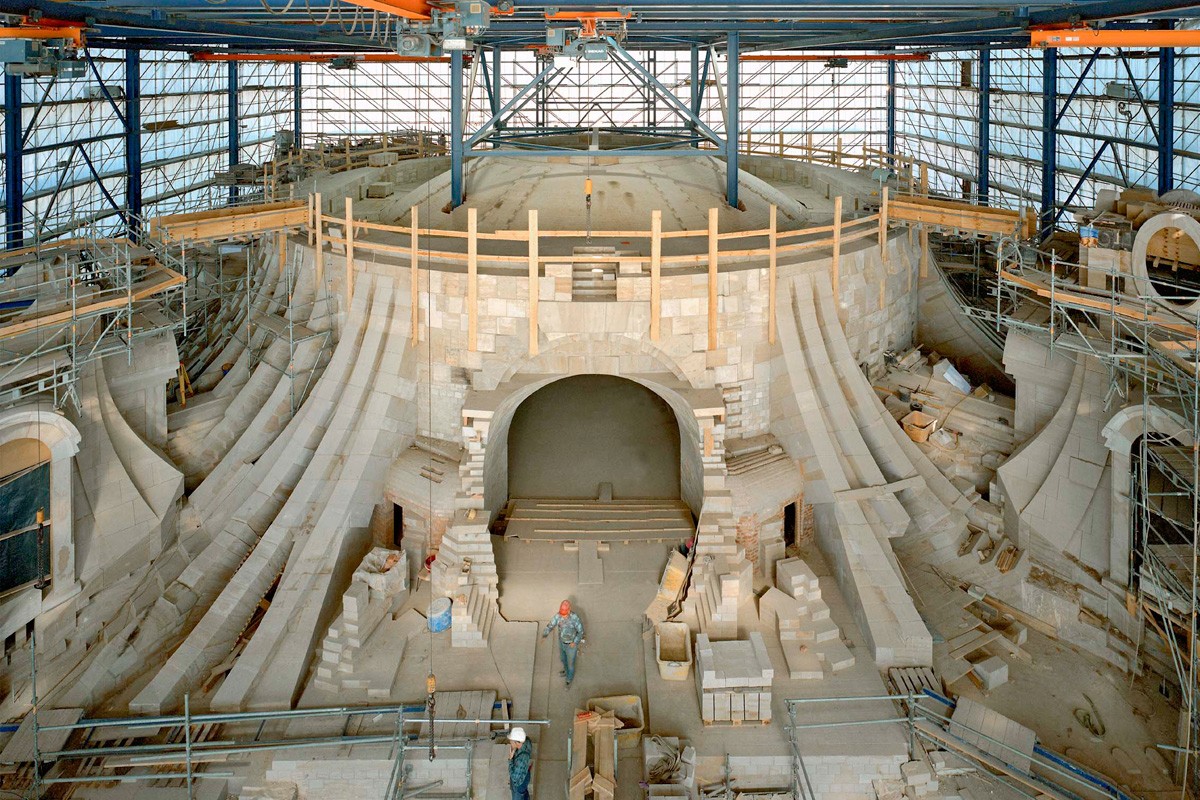 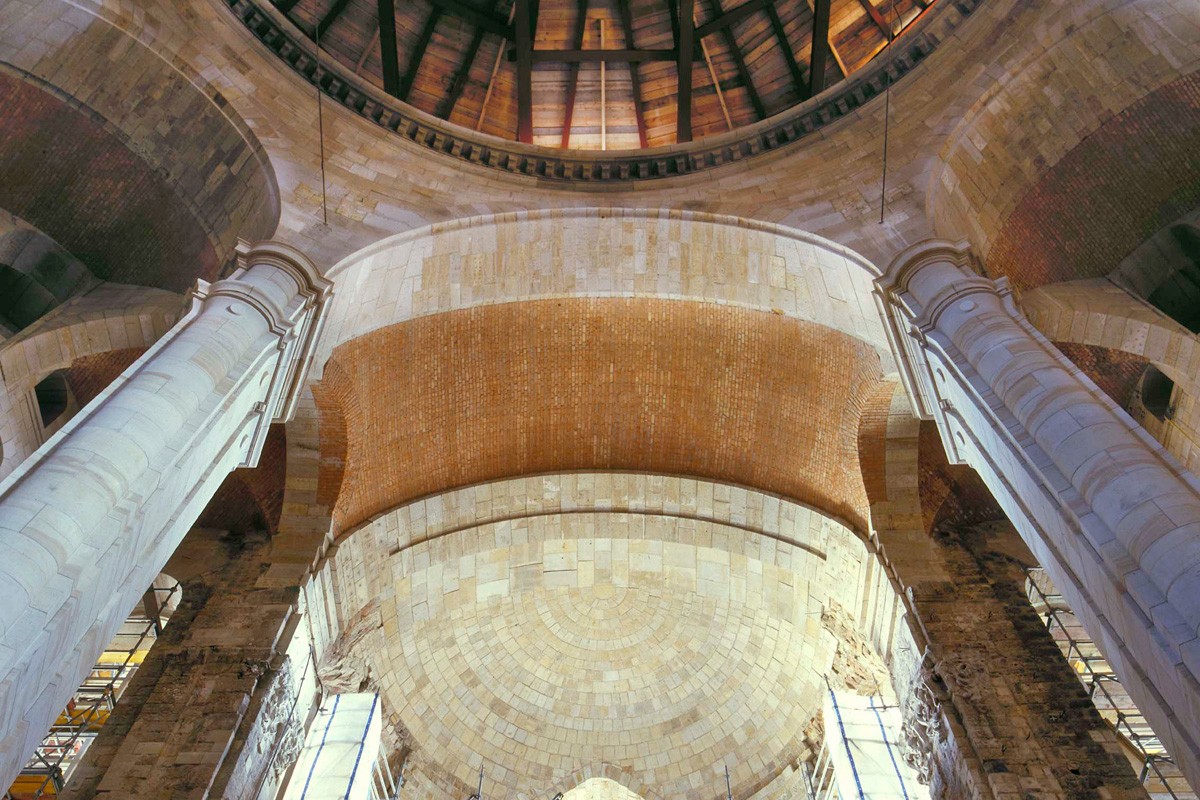 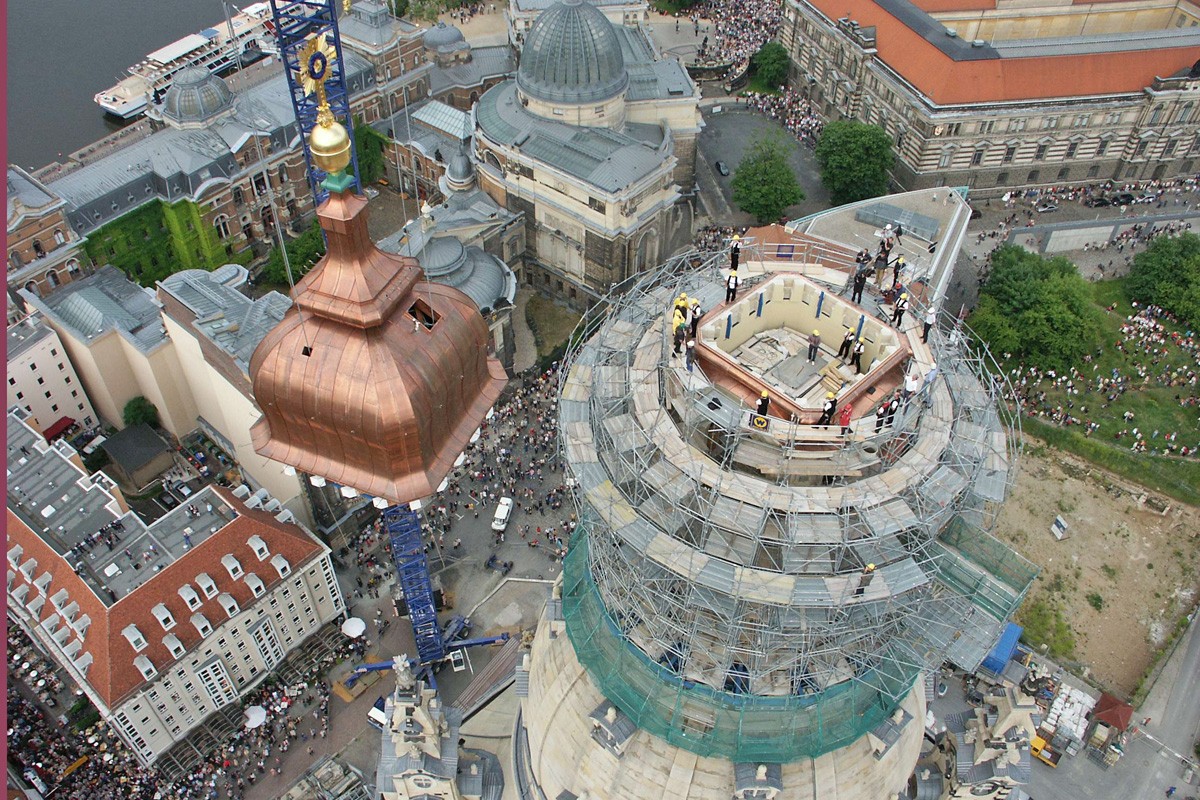 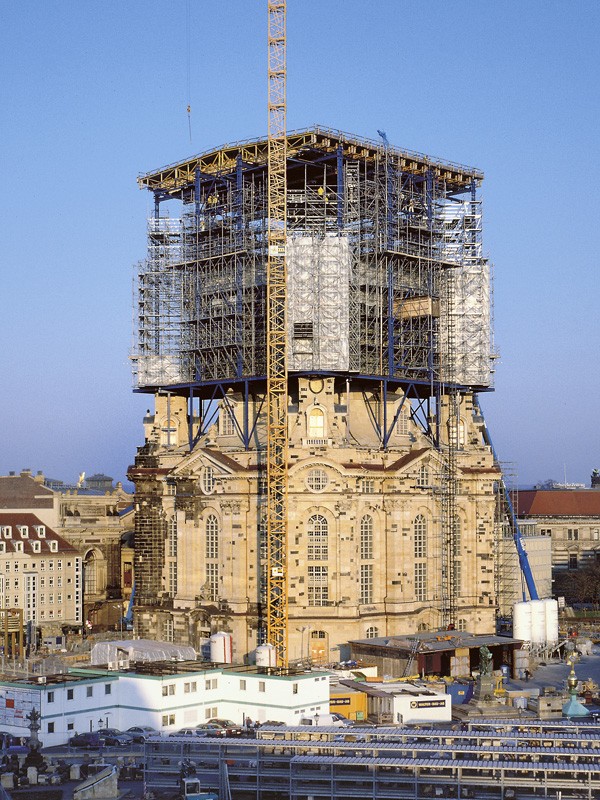 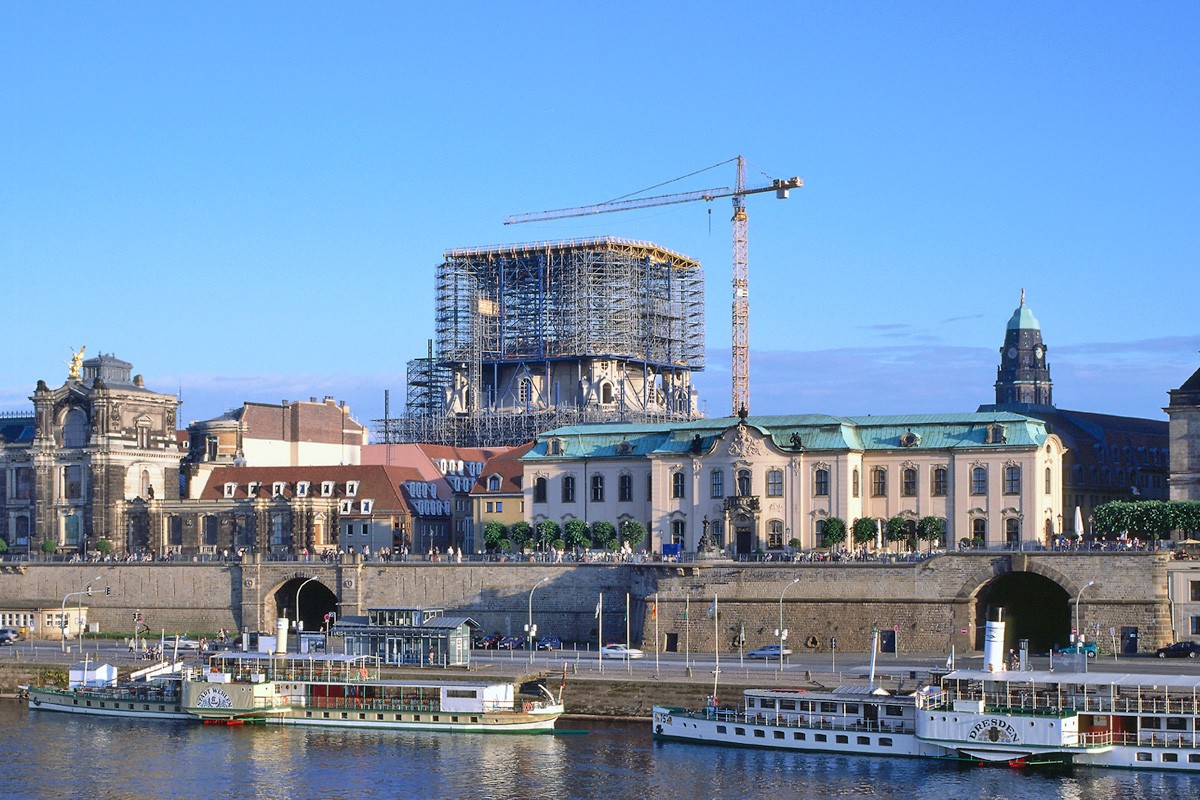 The Frauenkirche collapsed on 15 February 1945, two days after the devastating bombing of Dresden, the history of the church building, which was completed in 1743 by Baroque architect George Bähr, seemed to have come to an end. The Church had withstood the air strike and the rage of fire, but the blazing fire inside had damaged the structure to such an extent that is could no longer support the load of the dome weighing after all 12,000 t.
Ever since, the Frauenkirche has remained a ruin, was repeatedly in danger of being completely demolished and had been preserved as a memorial against war and destruction and as a symbol of the peace movement in East Germany. It would take 45 years before the wish for a reconstruction of the Frauenkirche was eventually turned into definite plans. After several sponsoring and promoting groups in Germany and abroad had laid the basic financial foundations, the City Council of Dresden approved the reconstruction on 20 February 1992. Architekten- und Ingenieurgemeinschaft GmbH IPRO Dresden was entrusted with the overall planning, whilst Ingenieurgemeinschaft Dr. Jäger / Prof. Wenzel was commissioned with civil engineering works. Prof. Jörg Peter was appointed as proof engineer.

The reconstruction followed three principles: (1) Mainly historic building materials should be used and (2) built in according to valid knowledge of structural engineering and building physics employing modern technologies. In doing so, the implementation should (3) consider all that is necessary for an active usage in the 21st century. Different sources from archives and photographs were used as a planning basis. Now it was particularly important to exactly calculate the flux of forces, which George Bähr estimated remarkably accurate despite a lack of structural engineering knowledge, and, if necessary, correct the structural concept. For the calculation of the building, the elaborate structure was divided into three main parts: the dome, the pillars with wall and tower attachments as well as the foundations. Corrections had to be primarily made where in the middle of the 18th century no structural knowledge was available.

Bähr had, for example, clearly recognised the effect of ring tensile forces in the dome area and had wrought-iron peripheral tie rods installed. However, he could not know that these rods expand when they take on loads, which caused their extension and thus cracks in the masonry. That is why the peripheral tie rods were now replaced with pre-stressed steel tension members. The significant modification is a pending tension ring on the level of the pillar arches anchored into the outside buttresses. The reduction of the joint thickness, the specific selection of blocks of stone and assuring that the blocks of stone are used in the correct position corresponding to their natural layering also yielded a significant improvement of the masonry’s resistance.
The stone is produced in the same quarry Bähr selected for the original building (Postaer Elbsandstein). Classified into requirement categorys the highly resistant masonry was used intentionally at highly stressed areas. For the pillar capitals Postaer Sandstein from the „Weisse Bank“ was used. With masonry in thin bed method the ultimate strength of 45 MN/m² could be confirmed.

The dome itself consists of two shells: the outer shell is now 1.10 m to 1.15 m thick (2.00 m in the area of the tambour), whereas the inner shell measures only 25 cm. Both are connected via 3 x 8 = 24 bracing bulkheads. The impressive 7.50 m thick foundation walls could also be reused. For this purpose it was endoscopically examined by means of core drillings and crimped where necessary; alternatively, damaged blocks of stone were replaced or equipped with anchors. For wide areas, the determined soil contact stress ranges between 300 and 500 kN/m², with a average settlement of only 15 mm.
That way, the engineers and the testing engineers were able to provide proof of the stability, also including thermal and sound insulation as well as fire protection. In 2004, the top of the tower was positioned in place, and after the dismantling of the external scaffolding on 30th July 2004, the residents of Dresden could for the first time marvel at their completed Frauenkirche.